We do not slow down the pace. We have just left Poland along the western border from the north to the south and we are already in Lower Silesia. We spent the weekend visiting the capital of the region, Wrocław. The weather is good all the time so we went to Opole, located several dozen kilometers east, probably still considered the capital of the Polish songs 🙂

Wrocław has been developing rapidly in recent years. An example is the magnificent communication and trade center, which was established at the train and bus stations. A completely new bus station has recently joined the railway building renovated a few years ago, and the entire area and surrounding area has changed beyond recognition. 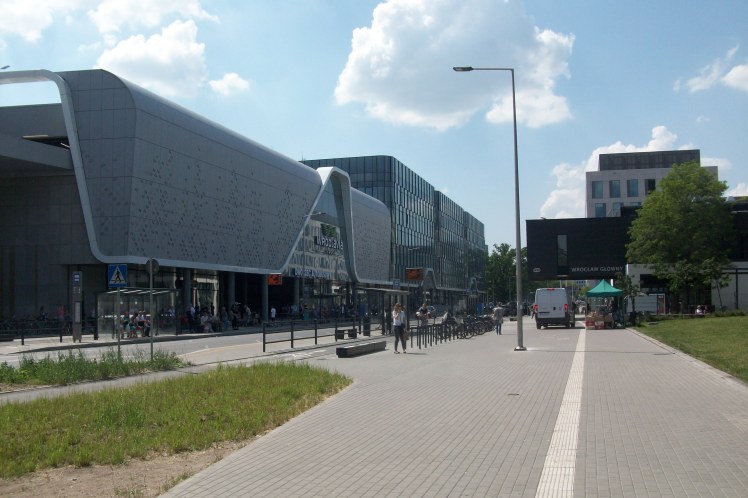 From the station’s side, along Świdnicka Street, we enter the city center. In front of us, the Renoma Shopping Center. In addition to the renovated ‚old part’ of the local Harrod’s in the back there is a part built a few years ago, but impressive, ‚new Renoma’. 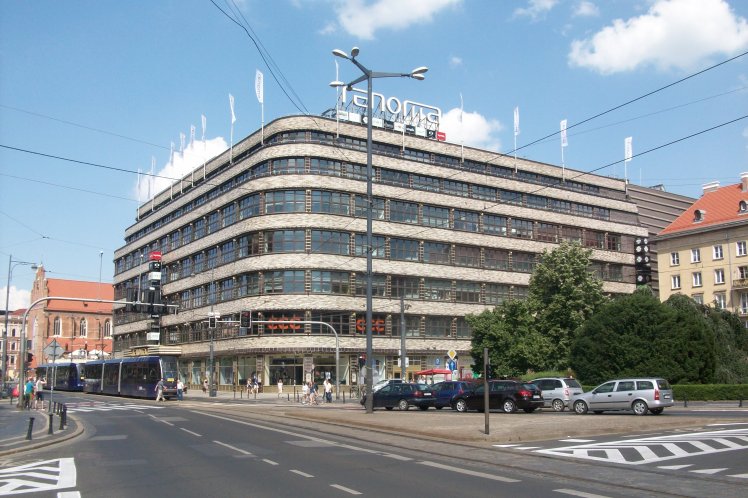 Another impressive edifice of Wroclaw is the National Forum of Music between the City Fosse and the Royal Palace. Let us remind you that Wrocław was the European Capital of Culture 2016 and the Forum itself was put into use at the end of 2015, also with a view to the upcoming cultural events. 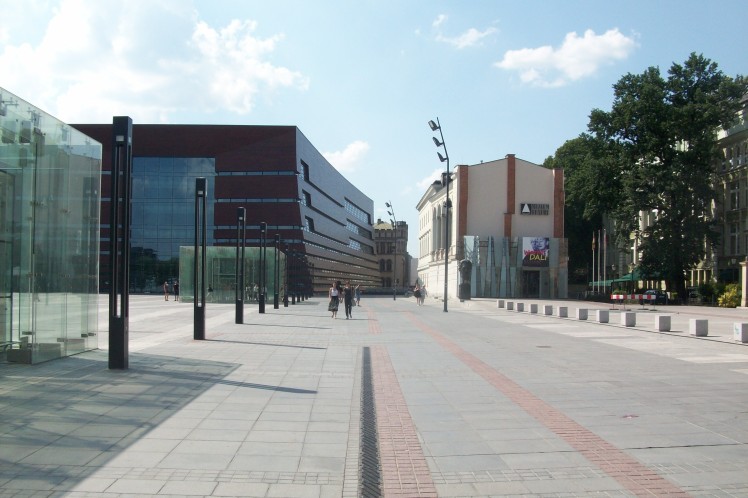 Freedom Square in front of the National Forum of Music. Another modern public space in the heart of the city. 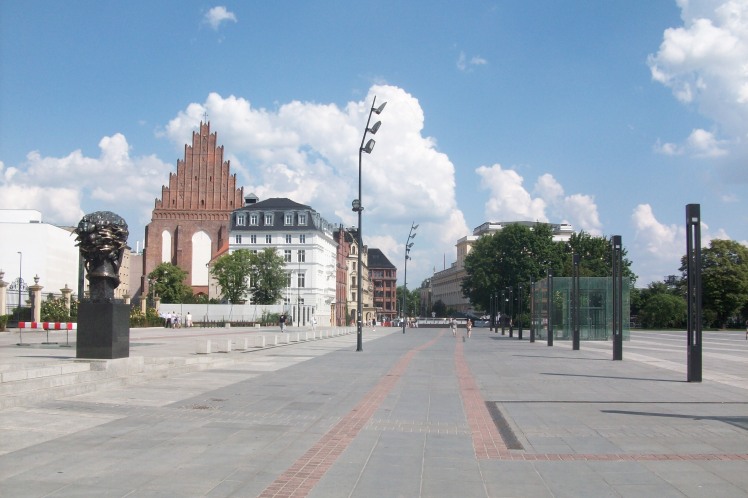 We are on Nowy Targ Square. In 1945, the development of the square was completely destroyed and after the war it was decided that Nowy Targ would not be rebuilt in its original character. Instead of magnificent tenement houses, there were blocks that did not fit the area. A few years ago, the square was rebuilt, the parking lot was hidden underground and some buildings were systematically renovated. Today, Nowy Targ looks decent. The only surviving building is the edifice which currently houses the City Hall of Wrocław. 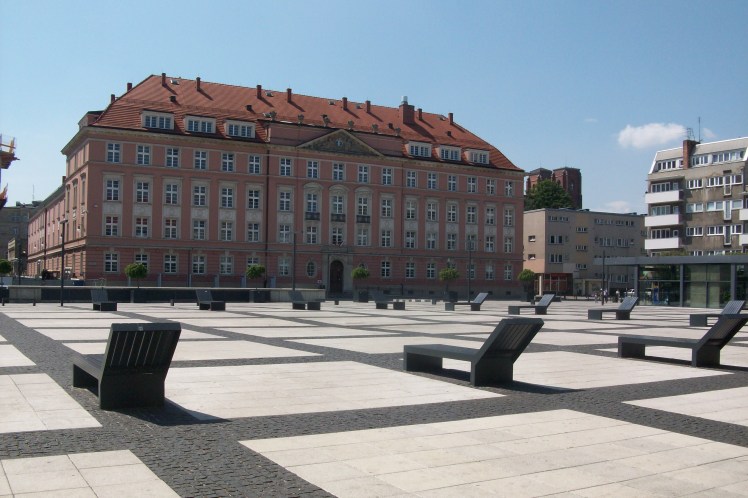 From the Odra quay we look at the two magnificent temples of Wroclaw. On the right, the cathedral of St. John the Baptist, on the left Holy Cross church.

We’re getting closer. This is the Tumski Bridge.

Cathedral towers. They did not suffer very much during the battles for the city in 1945 (they lost domes), so it can be said that in the vast majority they present their authentic appearance from before the war.

We’re on Xawery Dunikowski Boulevard. We are looking towards the Peace Bridge and coastal buildings.

And this is a small, full of lush greenery Daliowa Island. There is virtually nothing on it except this interesting example of modern art. It’s probably a sculpture, although who knows.

We are slowly approaching the Wrocław market. Along the way we pass full of café gardens, built up with high tenement houses and, sometimes, modern architecture downtown streets. 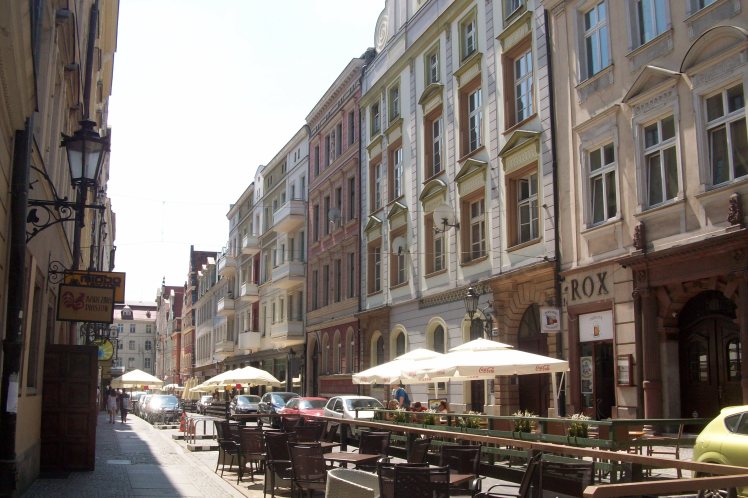 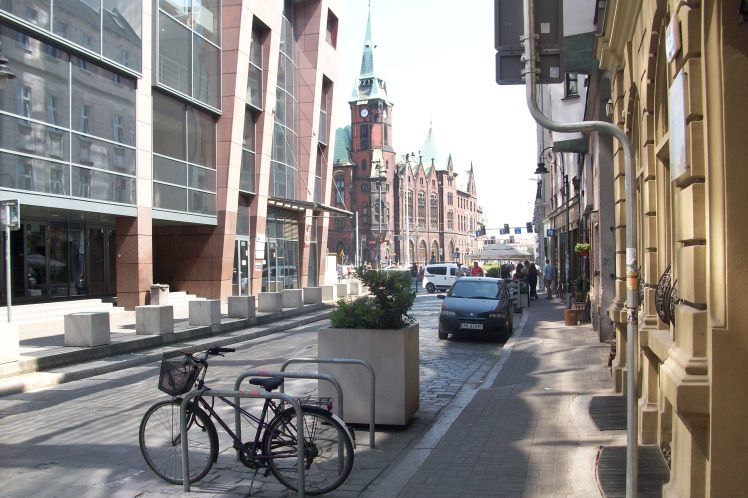 A view of the Market Square from Salt Square. 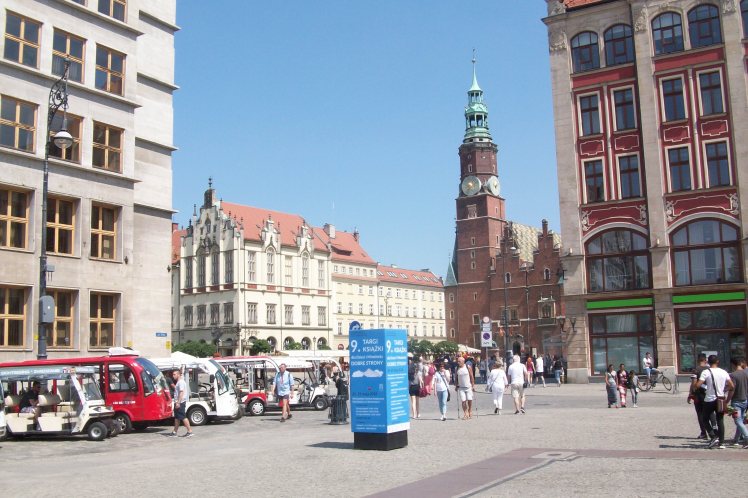 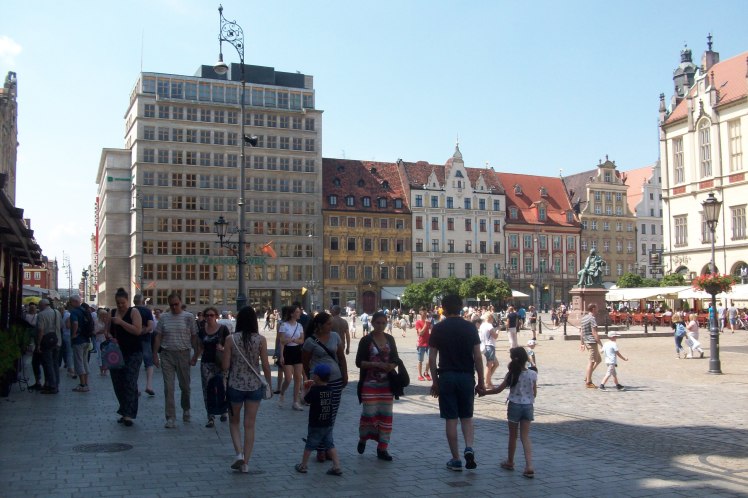 A Gothic, richly decorated City Hall in Wrocław at the end of our adventure with this beautiful Lower Silesian city, which is not virtually inferior to the same size of the metropolises of Western Europe.

Nevertheless an interesting city is several dozen kilometers east – Opole. The scale, of course, is not what Wrocław is, but it is more pleasant to visit in such sunny weather, because it is smaller.

We enter the downtown with the Piast bridge. On the left you can see the cathedral. 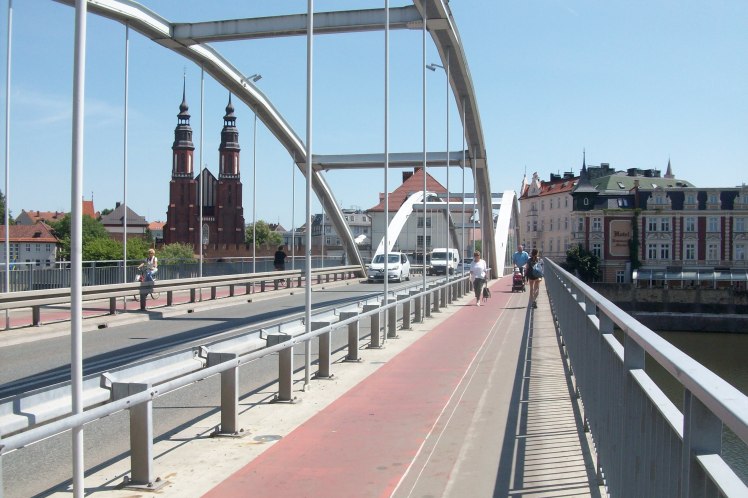 Very nice park around the Castle Pond, right next to the amphitheater. Even the music playing here from the speakers reminds us that it is Opole that still holds the title of the Polish capital of the song. 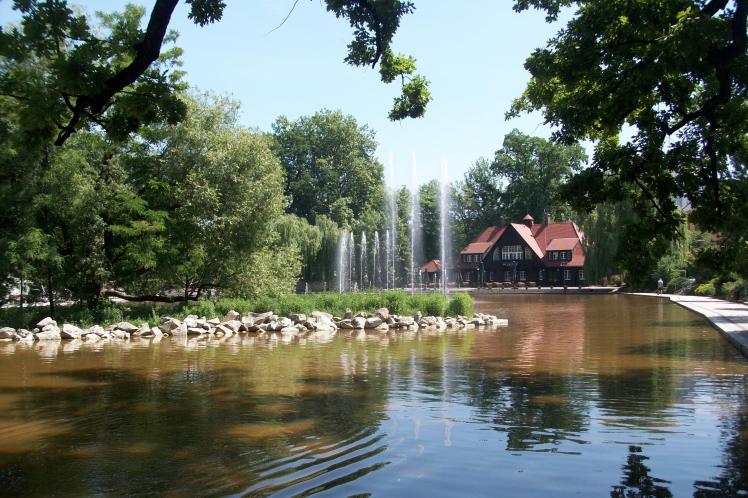 The Piast Tower right next to. Anyone who has ever watched the Opole Festival on TV must have seen it.

We are already on the Opole market. On the left a fragment of the impressive building of the Town Hall. 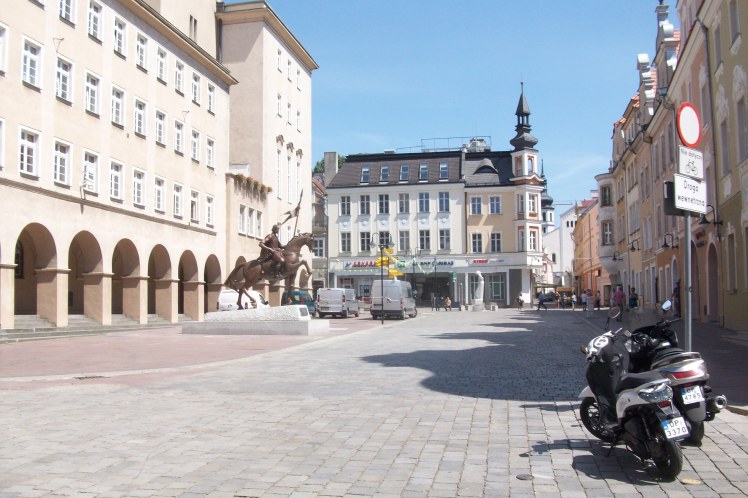 There is of course an Avenue of Polish Song Stars. It is here in the pavement that ‚stars’ are signed with autographs of probably all outstanding creators of Polish pop music over the last several decades. Among them could not miss Krzysztof Krawczyk, who after all ‚wanted to be a sailor …’

Right next to the cathedral is one of the last surviving fragments of Opole city walls. You can walk to the old artillery tower by wooden, old boards.

And this is already mentioned cathedral of Holy Cross seen from Koraszewskiego Street leading directly to the Market Square. 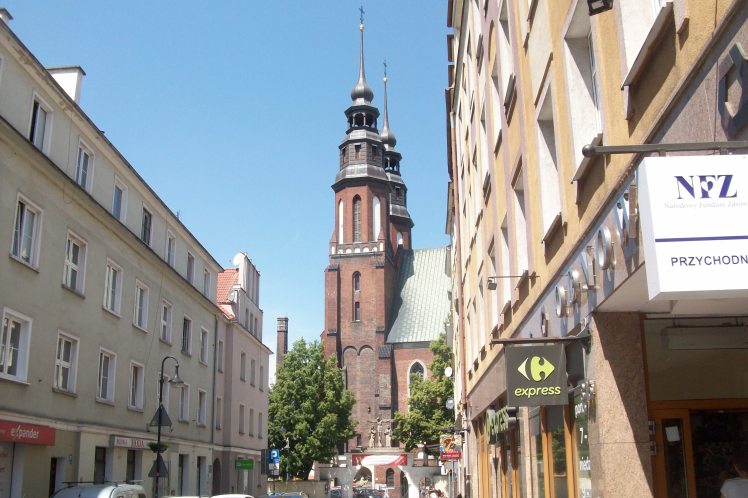 Opole Główne Railway Station. Equally proved both outside and inside.

And from the station only a step to the most charming corner of the city, that is Daszyński Park. In the middle of the square there is a beautiful fountain called ‚Opole Ceres’. 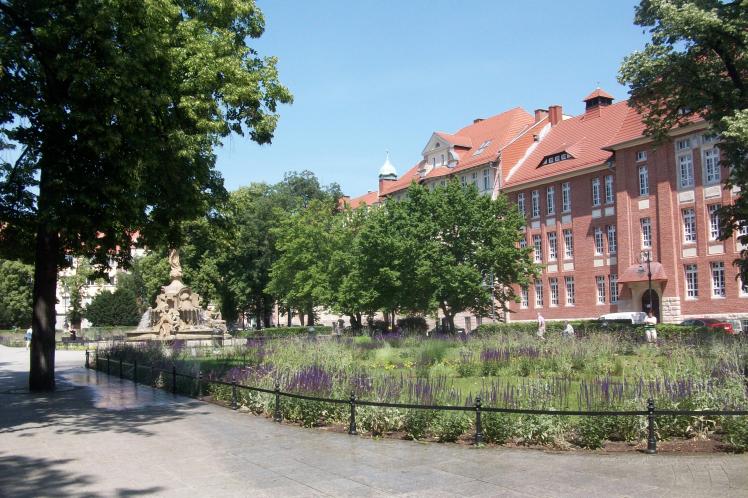 Returning to the city center it is impossible to ignore the buildings of the University of Opole. In their area there is among others the church of Our Lady of Sorrows and Saint Wojciech from which the stairs offer a panoramic view of St. Wojciech Street and the Town Hall Tower.

We go down the stairs to the street level and rotate behind each other. The facade of the aforementioned temple is in front of us. 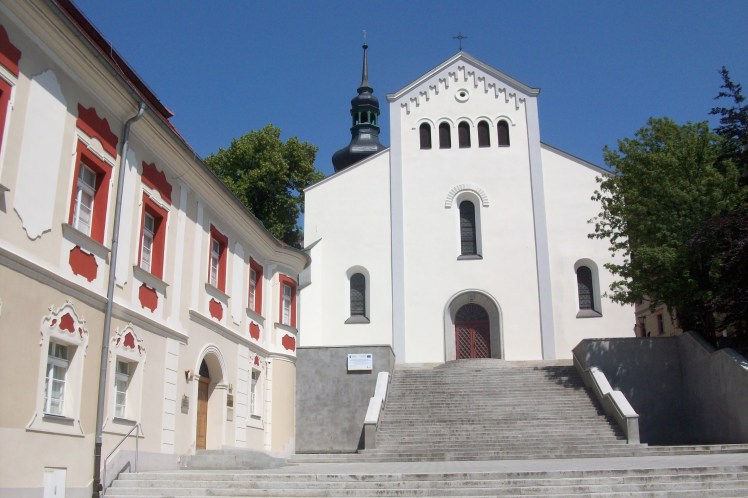 Only the last crossing through the Market Square and we return home, that is to Golf. Tomorrow we leave Lower Silesia and we set off on a further journey around Poland, this time to Wielkopolska and Kujawy.